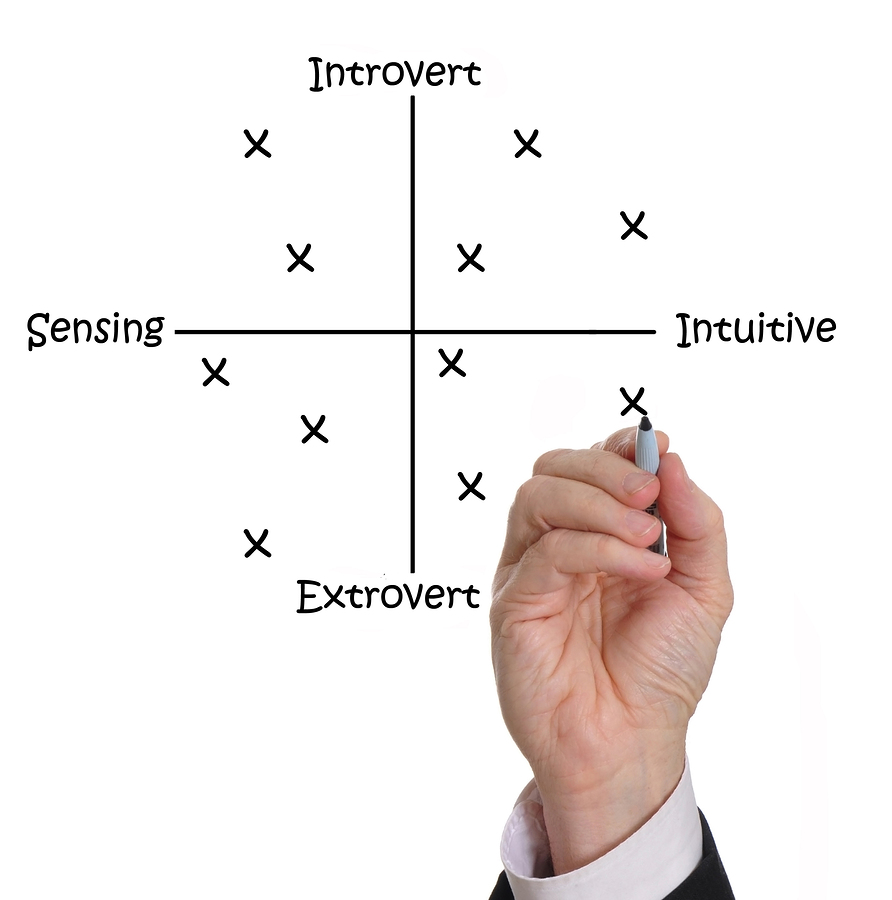 Personality is an individual’s unique manner of behaving and thinking that determines interactions with the environment.

Introversion and extroversion are terms commonly used in everyday language to describe personality and the differences between individuals.

There are many common myths and misconceptions about the characteristics of introverts and extroverts.

In psychology, introversion/extroversion has been an area of decades-long study and research and the terms are often described as existing along a spectrum, rather than in the all-or-nothing terms of mainstream opinion.

Introversion/extroversion is often described as deriving from where an individual places their attention and derives their energy.

Introverted individuals tend to focus their attention on ideas and regain energy after spending time alone and engaging in solitary activities and tasks.

Hans Eysenck (1967) and Carl Jung (McGuire & Hull, 1977) were among the pioneers in the study of introversion and extroversion.

Eysenck believed that introverts were more likely to become overwhelmed in environments with excessive stimuli and instead regained energy by spending time alone.

He believed that introverts become excessively stimulated by things that others might find enjoyable, exciting, or interesting.

Eysenck discussed how introverted individuals react to a traumatic event, such as a car accident (Eysenck, 1967).

He explained that an extraverted individual has a strong inhibitory response in such situations.

The brain of an extrovert does not fully process trauma when it occurs and will likely not recall details.

Since extroverted individuals emotionally protect themselves from the trauma, they will likely get in a car and drive again the day following a car accident.

In contrast, an introverted individual has a weaker inhibitory response in the face of trauma.

If they experience a traumatic event, their brains process the entire event as it is occurring.

Introverted individuals tend to be alert during stressful events and are typically unlikely to return to driving after the accident or may even stop driving altogether (Eysenck, 1967).

Carl Jung (McGuire and Hull, 1977) described attitudes people use to direct their energy either to the outer world (extroverts) or the inner world (introverts) and described both as healthy variations in personality.

Jung (1921) believed that there are two different ways that individual’s can of react to life circumstances and no one lives completely as one type or the other.

He described that introversion/extroversion are likely either innate or at least begin to manifest early in life.

Jung (1921) described that introverted individuals have vivid imaginations, are happier when alone, and prefer to think and reflect rather than actively engage in activities.

He described some weaknesses of introverted individuals, which included lack of confidence in social interactions, shyness, and a tendency to be hesitant.

Jung (1921) believed that introverted/extroverted individuals tend to marry their opposite in hopes that the other partner will compensate for the qualities that each lacks.

The relationship is satisfying to each partner as long as both adapt themselves to the other.  Jung described that there could be a lack of understanding between the couple.

Introverts can be described as being inner-world oriented (The Myers-Briggs Foundation, 2014).

They are inspired by ideas, pictures, and memories.

They prefer independent activities or prefer to engage in activities with one or two people with whom they are familiar.

Introverts do not act impulsively, but instead reflect on their ideas and decisions prior to responding and once decided, they tend to commit to their decisions. Introverts tend to think about things before talking, making them more highly sensitive to others.

They must fully understand a concept before giving their opinion and learn best through observing others and their environment.

A study conducted on introversion/extroversion and gambling explained the neurological differences between individuals and indicated that introverts responded differently to tasks involving reward and surprise (Cohen, Young, Baek, Kessler, & Ranganath, 2005).

Introverts demonstrated opposing reactions and did not perform well on tasks involving unpredictability and risk-taking.

These differences were linked to dopamine levels, which regulate the reward system in the brain.

(2012) concluded that introverts had physical differences in areas of the brain linked to abstract thinking and decision-making.

This indicated a tendency for introverts to think longer prior to making a decision.

Introverts will often use any extroverted traits they have or have learned in order to navigate situations that require extrovert behaviors (Sword, 2016).

However, in such scenarios where introverted individuals must adopt extroverted behaviors, the introverts’ ability to think and process information clearly can be affected.

Some studies indicate that extroverts outnumber introverts 3 to 1 (Sword, 2016).

This may lead to the mainstream belief that being extroverted is more desirable.

This common misconception can emotionally affect introverted individuals since they could assume that being outnumbered by extroverts means that they are inferior in some way (Sword, 2016).

It is important for introverted individuals and society as a whole to understand the positive traits of introverts so that introverts can appreciate and benefit from their abilities.

The importance of individuals understanding where they fall on the spectrum of introversion/extroversion is equally important as the ability to identify these characteristics in others.

This insight could help in gaining self-awareness, making important life decisions, and having more satisfying and positive relationships.

However, rather than confining oneself or others to a list of personality characteristics it is beneficial to use this information to understand that certain situations are better confronted from the standpoint of an introvert, while other situations require an individual to demonstrate extroverted traits.

Flexibility is an important factor in personality, as this could help individuals on each side of the spectrum to adapt to changing situations and life challenges.

My name is Serge Souprayen. I am an astrological Libra, the scales of justice, and a dog in Chinese astrology, which represents honesty and sincerity. Read more about me here